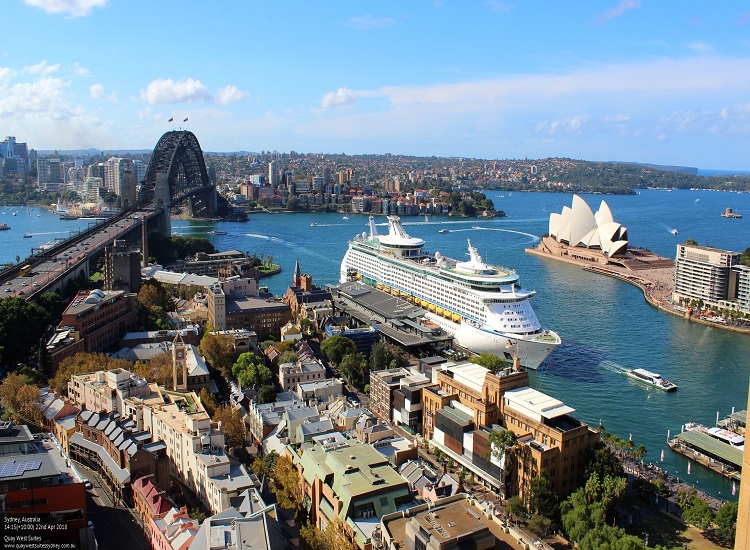 The voyage started on Sep. 26th, but I flew to Seattle on the 24th and stayed with friends.  They took me to Tetra Zen Zany which is a dinner theatre around the European circus tent.  The cross-dressing MC introduced the singers and acrobats who performed for us between courses.  It was a fun evening, and as they change the shows frequently, I would love to go back.

It was sunny and cool when I arrived in Seattle, but on the 26th, I woke up to rain.  I got to the cruise terminal around 1 pm.  There was no line, so check-in was a breeze.  They took my picture, gave me a receipt for my passport and gave me my keycard.

Cash is not used onboard.  If you want to purchase something, you present your keycard and it is in charge of your room.  At the end of the cruise, the final bill is charged to your credit card on file.

Next, the ship photographer took my boarding picture, then I headed to my cabin on deck one, also known as Dolphin deck.    The two suitcases sent via FedEx were already in the cabin, and they delivered the other two bags a couple of hours later.

Amsterdam has more closet space than other ships in the fleet because of its’ longer itineraries.  As I began to unpack my first two bags, I realized that there was an eight-inch rip in the corner of one suitcase.  I checked all four pillows on my queen size bed and found one that was suitably flat.

Then I put one on the couch, one in the chair and one in the window ledge behind my bed.  Next, I opened the drawers under the bed and found three blankets which I put on the bed.  Finally, I checked the closets to see if there were plenty of hangers.  Since I didn’t need anything from the room stewards, I went out to explore the ship.

The first stop was the front desk on deck four, also known as the Promenade deck.  I picked up the daily program and explained about the rip in my bag.  I was told to bring the bag to the front desk, and the luggage department would see if it could be mended.  If not, I would be given credit for a replacement.

The next stop was the Lido on deck eight.  I went through the buffet, then I read the daily program while I ate.   After lunch, I peeked out of the back door of the Lido.  As it was still raining, I didn’t go out to the rear swimming pool.  Instead, I went through the Lido toward the front of the ship.  The retractable roof over the main pool was closed, so I could walk through without getting rained on.

I made a stop at the pool bar and bought a soda card.  They cost $25 and are loaded with a $50 credit for sodas.  It is the cheapest way to buy sodas on the ship.  I generally buy several at a time and put them in my refrigerator.

If you want a refrigerator in your cabin, it is best to ask for one when you book your cruise.  All of the newer ships have refrigerators in the cabins, but they are not standard on the older ships.  In Amsterdam, I will be paying $2 a day for my refrigerator.

My next stop was the spa and gym at the front of the Lido deck.  I picked up the spa menu and signed up for personal training on the Pilates machine.  I have a small Pilate’s machine at home, and I wanted to develop a routine I could continue at home.

I went back to my cabin and found the other two suitcases waiting for me.  As I was unpacking, one of my two-room stewards showed up and asked if he could get anything for me.  He gave me a card with the names of both room stewards on it.  After I had the cabin arranged the way I like it, I opened my laptop and signed up for an internet package.

Since I am normally on the internet every day, I purchased 1000 minutes for $250.  Some people prefer to use the local internet services in each port.  Local internet is certainly cheaper, but I don’t like taking my laptop off the ship.

At 3:45 pm, we had a mandatory passenger safety briefing.  We used to have to wear our life vests to the briefings, but Holland America stopped that practice about a year ago.  The lifeboat station for each person is printed on their key card.  I looked at my key card and headed for station number six on deck three, also known as the lower promenade deck.  You can walk all away around the ship on this deck.

After the briefing, I went back to my cabin and reread the daily program.  I could dance to the music of the Neptune’s in the Ocean Bar, listen to Stryker in the Piano Bar, enjoy the classics with the Adagio Strings in the Explorer’s Lounge or dance to the music of the Station Band in the Crow’s Nest.  A recent movie was showing in the Waging Theatre at 6 pm, 8:15 pm, and 10:30 pm.

The casino and the Mirabella Luxury Collection were both advertising Champagne receptions, and the Signature Shops were offering complimentary liquor sampling.   There was only one show in the Queen’s Lounge, and it wasn’t really a show but more of an introduction to activities on the ship.

There are two sittings for dinner.  One is from 5:30 pm, and one is at 8 pm.  I had requested the 8 pm sitting at a large table so I could see the same people each evening.  The daily program listed a Single and Solo Traveler’s reception in the Crow’s Nest at 7:30 pm, so I decided to go to that before dinner.  There were more than 30 people at the reception, and the male dance hosts were mingling with the guests.

The La Fontaine dining room is on decks four and five at the rear of the ship.  My key card told me to go to deck five and it listed my table number.  I was offered a hand sanitizer as I entered the dining room and was escorted to my table after showing my key card.

I was seated at a table for eight with three couples and another single lady who wasn’t there on the first night.  The menu listed a choice of appetizers, soups, and salads, entrees, and desserts.  It was after 9:30 pm when I finally left the dining room.  I was tired and decided to go back to my cabin and relax.